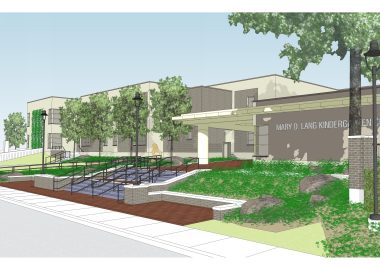 KENNETT SQUARE—The Kennett Consolidated School District is moving forward with plans to give the public a whole new view of the Mary D. Lang Kindergarten Center.

The school board voted last night to employ Bernardon Architects of West Chester to renovate the facade and entrance canopy of the school on Center Street in Kennett Square. The work is planned in two phases, the first in the summer of 2020 and the second for the summer of 2021. The project will include the addition of more windows in the facade and at the building’s corners.

School Board Vice President Dominic Perigo, who ran the meeting in the absence of President Joseph Meola, said the estimated $2,677,170 cost would come out of the capital reserve budget and would require no tax increase or bond issue.

Perigo said the building was attractive when it was built in the 1970s, but it was due for a renovation, since it was the district facility many parents first see.

The district recognized members who will be leaving the board following the recent election, including Dominic Perigo, Steve Ciprani, Rudy Alfonso and Aline Frank. Superintendent Barry Tomasetti was absent, as was Ciprani, so Assistant Superintendent Michael Barber presented awards to Perigo, Alfonso and Frank. All three said they were grateful to the staff and community.

Written by Matt Feeman; Originally published in The Daily Local.