In Rehoboth, an Alluring Lakeside Retreat 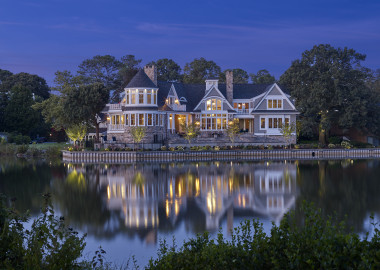 This Silver Lake stunner is a perfect place to entertain, relax and show off decades’ worth of memorabilia.

For Joe Filipek and Larry Richardson, Rehoboth Beach has long been a beacon, a personal safe haven that calls them back, year after year.

So when they decided to build a retirement home there, it seemed fitting to incorporate architecture and design features reminiscent of a lighthouse.

“We didn’t want a home that is modern,” Filipek says. “We wanted the look of a home of a sea captain who has traveled around the world and collected things.”

They also wanted to incorporate elements of cottage style into their home, harkening back to a smaller getaway they had enjoyed on weekends and vacations. The new house would be much larger, 6,000 square feet, with plenty of room to entertain and host visiting family and friends.

To navigate them through a sea of ideas, desires and challenges, the couple assembled a team of pros. Their mission was to interpret a 10-page wish list into an environmentally sensitive house that coexists peacefully with Silver Lake, the iconic freshwater body of water just behind the dunes several blocks away.

“We needed a great architect, a phenomenal builder and a wonderful interior designer,” Filipek says.

Silver Lake and its lovely views guided the design aesthetic.

“We wanted everything to be secondary to the lake,” Richardson says.

To that end, the couple voluntarily increased the mandated setback from the lake, in respect for both the environment and neighbors.

The view to the lake is revealed the moment the front door opens into a large foyer, which leads to a gathering room two steps down. Overhead, a chandelier of five large glass Moravian stars descends from a cupola. Natural light pours in from the cupola’s windows.

A tailored sofa in vibrant coral is a pop of color on the sophisticated neutral canvas that runs throughout the house. That palette consists of four colors: Mission White, an intermediate tone, a dull white that changes based on the light; Bennington Gray, a warm charcoal; Powered Sand, a lighter white; and Cloud White on ceilings.

“We are amazed at how many shades of white there are,” Filipek says.

Lighting that is functional and provides layers of ambiance was a priority for the couple. Achieving that required several sources: recessed lighting, sconces, overhead fixtures and standing lamps. A softly glistening chandelier of pearlescent Capiz shells illuminates the front hall. The chandelier, whose undulating rays mimic the sun, is a stunning sculpture, weighing more than 200 pounds and containing 180 pieces of hand-blown glass.

Throughout the house are personal reflections of both the setting and the homeowners. Tortoise shell chairs in the sunny sitting room are an homage to the many turtles that inhabit Silver Lake. The large snail art piece is the work of Tony Duquette, a legendary Hollywood set designer and interior decorator.

The den is masculine, with millwork of unpainted maple. The black veining in the Magma Gold marble surrounding the hearth remind Filipek of his days in the coal mines of his native West Virginia, where he worked his way through pharmacy school. The vintage rifles in the gun cabinet were handed down by his father, an avid hunter. The furnishings are keeping with the clubby vibe: a tailored sofa, tufted leather chairs, tiger cloisonné drum stools and a Russian empire ottoman with legs embellished with carved lion heads.

“It has a sense of intimacy and quaintness, a place where you can sit down with a few friends and enjoy a cocktail,” Filipek says.

Richardson’s study reflects his long career in the Navy. It includes memorabilia from the USS Valley Forge. A sailor’s whiskey bar is inscribed with the insignia of a master chief petty officer.

It’s a multipurpose room, a cozy place to watch movies. The study is outfitted with a sumptuous en suite bath with handmade ivory tiles and a heated floor, which makes it ideal as a guest suite.

“We thought a lot about the best way to use our space,” Richardson says. “If we require live-in help when we are older, the study could easily be converted into quarters for them.”

A white kitchen with Amish-built cabinetry is equipped with professional-grade appliances, including two dishwashers, dual ovens, a warming drawer, three prep areas and a butler’s pantry. Apron-style sinks at either end allow two cooks to prepare food and wash up without stepping on each other’s toes.

“We only use the kitchen in the winter,” Richardson says. “In the summer, we cook and eat outside.”

The master suite is a serene retreat, with two balconies providing open-air views of the lake. A large dressing room boasts a bank of built-in dressers and copious closets with mirrors inset in the doors.

“It has lots of hanging space and is light and bright, so much more inviting than walk-in closets,” Filipek says.

Splendor in the bath

The master bath is awash in luxury, with heated floors sheathed in marble set in a basket-weave pattern. A steam shower contains three body sprays, two rain heads, two shower heads and a hand-held shower. Mirrors above the vanity are made from fog-resistant glass. It’s a large space, with his and his water closets and a deep soaking tub in a niche created at the junction between the cathedral ceiling and the ledge of a large bank of windows.

“When you are sore, there is nothing better than a soak in the tub,” Richardson says.

Filipek’s study is situated in the upper level of the turret, which gives sweeping views of the lake. A zodiac light fixture is a reference to the lighthouse-style architecture of the turret.

Outdoors, the seasons are extended with a screen porch and outdoor kitchen. A hammered copper fire pit is an open-air gathering spot. A second porch is a private oasis with a hot tub and wood-burning fireplace.

“We wanted four fireplaces—three inside and one outside—and we managed to get them all,” Richardson says. “With the hot tub, we have fire and ice in the winter.”

The perimeter of the pool is lined with large bluestone pavers set just above the water line, a nod to the skipping stones of Filipek’s youth in West Virginia.

Terraced steps are inspired by the Lincoln Memorial in Washington, D.C., and provide casual seating when the couple entertain.

“You always see people sitting on the steps of the memorial having small private conversations, and that is just what happened on a smaller scale when we had a housewarming party,” Richardson says. “We had a vision for our home and we are happy to say that vision came true.”

Respect the environment. Joe Filipek and Larry Richardson made their setting on Silver Lake a priority in designing and building their home. Incorporate your personality and personal history into the design. A mariner’s compass inlaid into the floor, Moravian star lighting fixture, glass sunburst chandeliers and a turret reminiscent of a lighthouse reflect an affinity for the sea. Turn challenges into opportunities. A cocktail and wine bar serves as a transition, spanning the levels between the kitchen and a sunken family room. Establish a pleasing palette. Three shades of white with deep grey accents set a consistent tone throughout the house, a neutral canvas for splashes of color. Assemble a great team. For the couple, that started with an architect, a builder and an interior designer. Filipek and Richardson were active, engaged participants, meeting regularly with the pros.