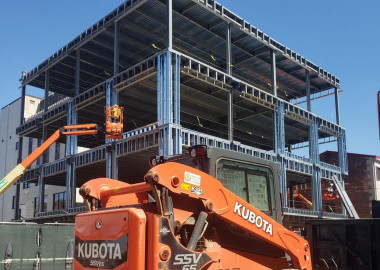 WEST CHESTER— The memory of the Mosteller Building is fading fast as a four story steel skeleton structure rises.

The top three floors, at the intersection of Gay and Church streets, are fully leased for offices. Builder Eli Kahn, of E. Kahn Development Corp., seeks to fill the ground floor with two restaurants. Kahn said that the eateries will hold liquor licenses.

The 44 West project is on-budget and on-schedule, Kahn said. Office workers will be pounding on keyboards by Spring 2020.

The site is a beehive of activity and soon we will see concrete poured for the floors and then masonry work, followed by the placement of windows.

A plaza with a year-round fountain will face Gay Street.

In other related Kahn news, work on the Rubenstein/Salvation Army Building on Market Street is expected to commence late 2020.

One hundred and sixty, efficiency and one and two bedroom apartments, are planned for the site.

The project is currently in the zoning stage.

Written by Bill Rettew; Originally published in The Daily Local.