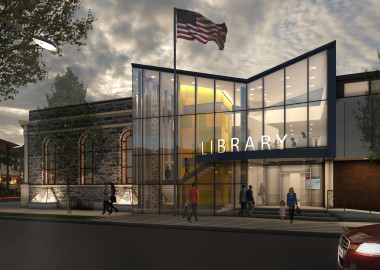 Approval is subject to a formal agreement that township Manager Larry Gentile and Solicitor Jim Byrne will negotiate.

If all goes well, township officials plan to relocate administrative offices to a new municipal center, currently under construction at 1010 Darby Road, in fall 2017.

Library officials were planning to spend about $310,000 to rent space for storage, temporary offices and limited services during a major reconstruction project that was expected to begin spring 2017.

Speaking at a recent work session, Commissioner William Wechsler said, “It makes sense to dovetail the projects” so that library construction would begin when township buildings are vacated.

Architect Lee Casaccio drafted diagrams showing how the library could potentially use the township’s main building for storage. The Quatranni Building would house a circulation desk, stacks, youth services and more.

The township is providing a total $6.75 million for library renovations, plus $500,000 toward a Keystone matching grant library officials hope to obtain.

Construction manager Damion Spahr did not think the schedule change would increase costs.

Casaccio further provided a general progress report to commissioners, noting that the overarching goal of renovations is to create a “vibrant, welcoming, nurturing place and community hub for creative learning.”

Highlights call for recreating the main entrance so as not to overpower the historic Haverford Township Bank Building, which housed the library since 1938. An addition was built in the 1970s.

And, “we tried to create an entrance that is transparent so you can see into the library, see activity, be drawn into the life, color, all that’s happening,” Casaccio said.

Children/young adult areas will remain on the second floor, in addition to offices, a board room, technical services and more.

The lower level will feature a community room that can be partitioned into two spaces, a catering kitchen and “maker space,” which Casaccio described as all the rage in libraries across the nation.

Maker space is “designed to promote creativity and community … We’re finding that libraries are no longer places to come to look something up or pick up a book. They’re a place to come … to do and create,” said Casaccio.

Examples of possible low-tech activities in maker space include sewing, paper-crafting, and knitting. 3D printing and media production are among possible high-tech endeavors.

Plans further provide for new HVAC/electrical systems and core technology infrastructure that will have the ability to grow and adapt to future needs, Casaccio said.

He noted that Carson Block, a leading library technology specialist, and nationally known library planner Bill Wilson are involved in the project.

Wilson’s program plays an important role in the library’s Keystone grant application, as it details utilization of total space in the building, Casaccio said.

The parking lot will be re-striped in an attempt to gain more spaces, as well.

In response to a question from Commissioner Andy Lewis, Spahr maintained that renovating the current library costs less than building anew.