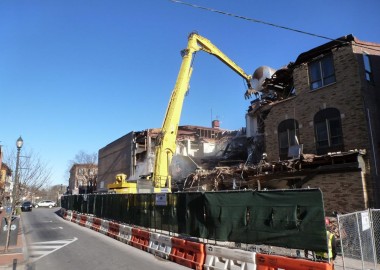 WEST CHESTER — Following several years as an eyesore, sitting at what is one of the busiest intersections in the borough, demolition began Friday for the Mosteller Building.

Builder Eli Kahn, of E. Kahn Development Corp., plans to build a 44,000 square foot mixed use structure, with at least one restaurant at ground level, and several floors of offices upstairs.

For several years, Kahn was a regular visitor at municipal meetings. Plans changed more than once.

“It’s about time,” Kahn said on Friday about the project dubbed 44 West. “Hallelujah.

Kahn said the demolition would last about three months and he is shooting to complete construction during late 2019. He recently said that the impact on motorists would be minimal.

Borough Council President Diane LeBold talked about the building that housed a department store and then county offices.

“The Mosteller Department Store was an important anchor in our town center for many years,” LeBold said. “But, by the time I moved to town in 1984, it was already county offices and pretty much an eyesore.

“So, although it’s very sad to see that building coming down, I’m looking forward to a huge improvement at that corner, now that Mr. Kahn’s project is finally underway.”