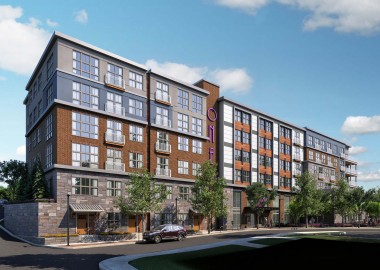 One of the key ingredients to making a trendy neighborhood these days is having a trendy name. Now a section of Bala Cynwyd has one — NoBA.

NoBA is the name a developer is using for the area around Bala and Union avenues where three large development projects are in the works.

“It is short for North Bala Avenue, but it was clearly a signal that fresh ideas are coming,” said Kevin Michals, principal with Cross Properties.

The comments by Michals were made as he was the keynote speaker at the CityAve Futurecast breakfast and networking event hosted by the City Avenue District.

Cross Properties is behind three large apartment projects in the area around Bala Avenue and Union avenues in the Bala Cynwyd section of Lower Merion.

The first project to get approvals from Lower Merion Township was the long-vacant two-acre site at 10 Union Ave. The site had been an empty field for about the past 15 years when an older office building was demolished. Now under construction, it will be a 109-unit apartment building that is expected to be completed by the end of the year.

The second project is across Union Avenue at Cynwyd Road where they purchased an old office building that had housed a Montgomery County District Court office for the past decade. That site also consisted of former homes that had long ago been converted into businesses along Cynwyd Avenue.

The new building will be a mixed-use structure with 75 units and over 7,000 square feet of commercial space.

Demolition of the old buildings has begun and the project is expected to be completed by the summer of 2019, he said.

Project No. 3 at North Highland and Bala avenues will be a third mixed-use apartment building with about 80 units and 7,000 square feet of commercial space.

According to Michals, Cross Properties recently purchased a liquor license that is expected to be used for a business in the site.

“We grabbed [the license] when we could, and we’ll use it as a chip — an investment in a future restaurateur,” Michals said.

Among other projects in Lower Merion, Cross Properties has built or redeveloped the Palmer Apartments in Wynnewood and the Square Apartments in Ardmore.

According to Michals, the township has helped in the process and enabled the area to become more competitive with other regional business hubs.

“The work Lower Merion Township has done to create a commercial core that allows for live, work, play, learn and to be competitive on an equal front — to compete with the Naval Yard, to compete with King of Prussia and Radnor,” Michals said.

These improvements on the township’s part include recently enacted zoning changes in the Bala area.

“I’ve read multiple master plans or studies of what Bala Avenue could be or should be … [going back] to the ’80s, and unfortunately, the proper zoning was never put in place. So that is really the why now — the zoning has been put in place, and once that happened, we ran in and bought as much property as we possibly could to be part of the redevelopment,” he said.

Part of the NoBA designation is also about bringing life to the area. With that in mind, Michals said rather than keeping their office building empty, they’ve been holding pop-up events such as bringing in food trucks, ice cream and Rival Brothers Coffee to give people who live and work in the area events to do. A couple of weeks ago, they held a BYOB jazz and blues night.

“The long-term intention is to have curated … retailers up and down the street to make it a fun destination,” he said.

Rather than putting up brown paper over the windows of their office, Michals said they want to have these kinds of events to engage residents of the area and listen to what they want for the neighborhood.

“We’re looking for a vibrant town center for a balanced mix of residential and commercial — obviously to have a vibrant downtown, transit-oriented development — the Cynwyd train is right there,” he said.