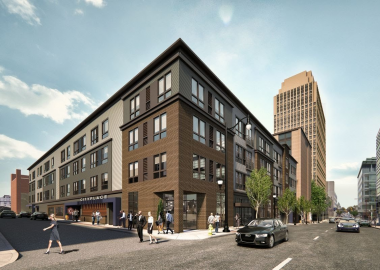 Downtown Allentown’s most active developer plans to build nearly 200 more apartments at the site of the former Holiday Inn hotel and conference center, with rents starting at $750.

City Center Investment Corp. on Tuesday received a favorable recommendation from the Allentown Planning Commission to convert the vacant nine-floor hotel in the 900 block of Hamilton Street into 120 apartments. Planners also approved City Center’s proposal to construct a four-story apartment building with 78 more units in the place of the razed conference space along South Ninth Street.

The city Zoning Hearing Board has final say on the adaptive reuse of the hotel building, and on exemptions City Center is seeking so it doesn’t have to provide the required amount of storage space. It will consider the Cityplace application Aug. 5.

The project will cost about $25 million, Reilly said. As with Walnut Street Commons, 555 Walnut St., City Center will use private financing rather than tapping NIZ, even though the Holiday Inn property falls within the 128-acre tax incentive zone. It’s City Center’s first residential renovation project, and its first building in the 900 block of Hamilton.

Reilly reiterated Tuesday that the most effective way of providing more affordable housing and attracting more businesses to the city is to increase the supply of residential units. He believes Cityplace will attract workers in entry-level and lower-wage positions.

“We all recognize that to have a vibrant and sustainable downtown, we need to have more people living downtown,” he said. “We think Cityplace will help fit the bill for that.”

Shops and offices will fill the ground floors. The project will include a courtyard with a pool and outdoor lounge with grills and fire pits between the two buildings. Other amenities include a fitness center, business center, theater room and bicycle storage.

City Center will replace windows in the renovated hotel, or north building, with larger windows. With exposed concrete ceilings and vinyl tile flooring, the building will have a more “creative industrial feel” than City Center’s other apartment buildings.

The company has begun accepting deposits to reserve units in the renovated hotel building.

Built in 1982, the 224-room hotel opened under the Hilton flag and was the top offering downtown for years. However, occupancy dipped below 30% and the Hilton brand was dropped.

City Center bought the Holiday Inn for $10.25 million in late 2017 and closed it on Dec. 27 of that year. It decided to demolish the conference space this spring after determining a renovation was not economically feasible, Reilly said.

He believes the Cityplace complex will spur further redevelopment of the commercial spaces in the 900 block of Hamilton, which Reilly characterized as in “poor shape.”

Ce-Ce Gerlach, a City Council candidate who lives on South Ninth Street and promotes more progressive affordable housing policies, asked City Center to consult neighbors on the type of retail vendors they would like to see, and hoped the vendors would offer products and services at affordable prices.

“When development goes on, the last thing any resident wants is to feel like they are being developed on top of,” she said. “As the project proceeds, we hope there’s open communication.”

As in recent cases, City Center is seeking an exemption from zoning requirements related to minimum residential storage space beyond what’s included within a given unit. And it’s also proposed a zoning amendment, reviewed by the Planning Commission on Tuesday, that would only require extra storage space for units less than 700 square feet. The amendment would also reduce the required extra storage space per unit to 16 square feet from 35 square feet.

While the existing storage requirement might have made sense decades ago when single-family homes were being converted to multifamily homes, it’s burdensome for the developer and “excessive to today’s renters,” City Center argues in its proposal. Reilly added that Reading is the only other Pennsylvania city with a similar requirement, and that the mandate may be deterring other developers from building in the city.

Planners expressed ambivalence about the proposal and directed City Center to make its case to City Council.

Written by Andrew Wagaman; originally published in The Morning Call.