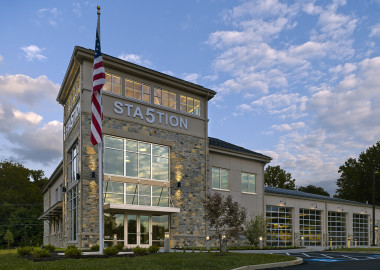 Bernardon is among 26 architecture or design firms who have been recognized by Firehouse Magazine in their 2015 “Station Design Awards,” an annual awards program whose goal is to recognize achievement in the design of fire stations and emergency service facilities across the nation.

Bernardon, which was also recognized last year for the Minquas Fire Co. No. 2, received notable recognition this year for the East Whiteland Township Volunteer Fire Association, a new facility in the category of “Volunteer/Combination.”

After fifty years in their station, growth in the service area, the evolution of fire-fighting technology, and the integration of volunteer and career staff put enormous pressure on the East Whiteland Township Volunteer Fire Association (EWTVFA) facility. In 2009, the search for a new home commenced, and a site was chosen for a new facility that would be more centrally located and allow them to better serve the local community.

The station is designed for maximum comfort, health, and safety, including a spacious dayroom with modern kitchen, training room, fitness room, and dorm rooms, which are large enough to accommodate both career staff and volunteers.  The building plan provides a direct flow from the dayroom through the gear room and into the double-sided apparatus bays, allowing for faster emergency response time.

The northwest corner is the landmark feature and ceremonial entrance to the building. A distinctive two-story tower lobby echoes traditional fire station forms. As a tribute, a steel beam salvaged from the tragic events at the World Trade Center on September 11, 2001 is on display directly opposite the visitor entrance.

The natural stone veneer is a key element of the exterior design that contributes to the long-term performance of the building.  All the stone is sourced locally, including about 25% extracted directly from the project site during excavation, an elegant solution to a rocky site that might in other cases have slowed construction.

In addition to the locally-quarried natural stone, other sustainability features that will help the building achieve the desired LEED Silver certification include a building envelope with insulating values up to 40% higher than code requirements and an underground rainwater collection cistern.

The new station will make the EWTVFA a more responsive and efficient operation, reliably serving the community for the next fifty years to come.

To see the full list of winners of this year’s “Station Design Awards” visit www.firehouse.com.