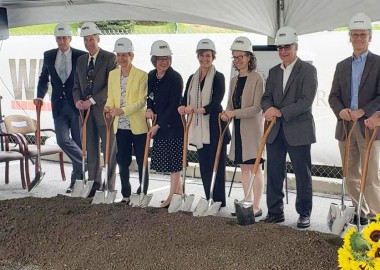 WEST CHESTER — A participant in Thursday’s ground-breaking at the Barclay Friends Assisted Living Center referred to the occasion as “bittersweet.”

While several speakers alluded to the Nov. 16, 2017 fire that killed four residents, there were also many smiles.

Thirty-five ambulances blocked nearby roadways and 152 staff and residents were safely evacuated from the overnight blaze fueled by heavy winds.

Thursday’s ceremony was a chance to move on and recognize construction of the $24 million steel and concrete, 61,000 square foot structure, that will house 60 residents.

Mayor Dianne Herrin spoke to about 100 well-wishers about the new beginning.

“The past year and a half has been challenging to both Barclay Friends and the community,” Herrin said. “This is so reflective of the Quaker Religion — integrity, community and stewardship — with an incredible compassion and commitment of the staff.

On an overcast day, Executive Director Linda M. Sterthous talked about the home that opened in 1893.

“This is a very sunny and joyous occasion,” she said about the ceremony that took place a few feet from earth-moving equipment. “We’re building up the soil, making for something new.

“This is a major milestone in the history of Barclay Friends.”

Sterthous said that the new facility, known as Preston, will host three gardens.

“We are eternally grateful for all those who got us here today.”

County Commissioner Kathi Cozzone was excited and grateful to be a part of the event.

“We have to congratulate you on this important step,” Cozzone said.

The new building will be named for Dr. Ann Preston, a Chester County born Quaker. Preston was an educator, abolitionist, physician and the first woman dean of the Medical College of Pennsylvania. She opened a school of nursing, and continued to push for educational opportunities for students of the college, including more and better clinical experience.

Residents, visitors and staff will enjoy much natural light and have easy access to gardens where they can plant flowers and vegetables year-round. Two gardens with walking paths will host a horticultural therapy program.

Twenty private apartments will be set aside for those with memory loss.

“Located on the first floor, the memory support neighborhood will offer residents assistance while maintaining a sense of autonomy, continuous learning, personal fulfillment and independence,” reads the event program. “The memory support neighborhood will connect directly to a private garden, where residents can enjoy the natural world in a safe area.”

Timothy J. Cassidy said that architect Bernardon has had a long successful relationship with the Barclay Home for more than 20 years.

Elizabeth Guman, board chair, also spoke. She lauded the home for its bravery and compassion.

“You responded to that challenge courageously and compassionately,” she said.

“Who would have thought that we’d be doing this a year and a half later?” he said. “This is the beginning of new era for Barclay Friends.”