Reclaiming the Renaissance: An Exploration of Renaissance Architecture Featured in Netflix’s “Medici” 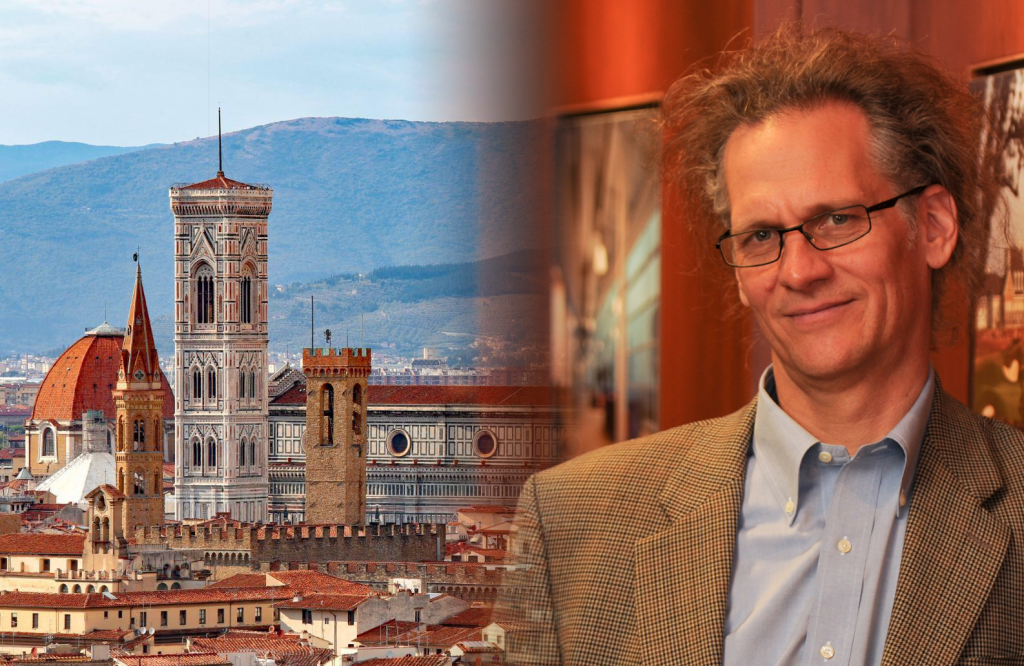 Binge streaming entertainment on Netflix has become a pop culture cliché during the pandemic quarantine experience. And, like all good clichés, there’s a little truth behind it. Okay, I admit it, I’ve already burned through all of my “A List” choices and I’m now sifting through the “B List” offerings.

I recently started watching Medici on Netflix. It has the basic storyline of a period romance novel with a cup full of Machiavelli mixed in. Initially I thought I would lose interest, but it’s all filmed on location in Tuscany and the sets featuring beautiful architecture and landscapes held my attention long enough to allow me to recognize the employment of some Hollywood production magic.

So, I started a little architectural investigation to keep things a bit more interesting. Below are some iconic Florentine structures that appeared in Medici and my findings on their placement in the show. 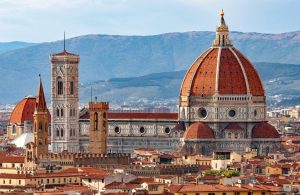 Medici is based in 15th-century Florence during the Renaissance, so they show you plenty of iconic scenes of Renaissance architecture. Most notably, the show features the Duomo, considered to be the birthplace of the Renaissance, just to make sure you know where scenes are supposed to be occurring.

The Duomo sits atop the Basilica di Santa Maria del Fiore, commonly known as the Florence Cathedral. Although its construction began in 1296, the iconic dome wouldn’t be completed until 1436. At the time, Italian architects and engineers wanted to create a structure that exemplified the circular concrete dome shapes of the Pantheon in Rome. Architect Filippo Brunelleschi designed the Duomo utilizing an inner and outer dome structure that was revolutionary for its time, and came to define the innovative technological spirit of the era.

There are a few other place-grounding shots of the Arno River, the Ponte Vecchio, and Palazzo Vecchio, but I started to notice that many of the close up street shots and building facades looked like familiar Renaissance icons at first blush, but there were some things that looked a bit out of place. So, I had to watch another episode –you know, strictly for research purposes. 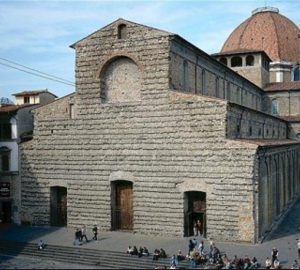 The Medici dynasty commissioned many great buildings in Florence, but in my mind, none is more closely tied to their legacy than the Basilica di San Lorenzo, the family Parrish. One of the largest churches in Florence, the Basilica itself was also designed by Filippo Brunelleschi, but the compound also includes the Laurentian Library and the Medici Tombs, designed primarily by Michelangelo. Cosimo de Medici the first member of the Medici family and Cosimo III, the sixth Medici ruler with the longest reign – 53 years – are buried within the Tombs. Despite being an art and architecture treasure trove, San Lorenzo does not have a formal façade. It seems that they ran out of money before its completion. Only the rough structural masonry exists. Nonetheless, its non-façade façade makes it very distinguishable, or so it would seem. 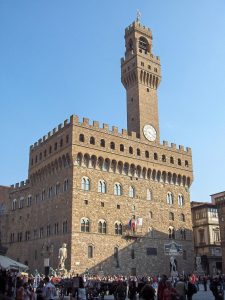 This isn’t the only building in Tuscany that suffers from fiscal insolvency (another theme for another day). While continuing my research (I may have opened another bottle of wine), I noticed that the cast was frequently walking in front of the characteristically rustic façade of San Lorenzo and then would suddenly be standing in front of the Palazzo Vecchio. In reality, the two are nowhere near one another. Built in 1299, the Palazzo overlooks the Piazza della Signoria, an L-shaped square that actually holds a replica of Michelangelo’s David statue. In actuality, the Basilica di San Lorenzo is in the city’s main market district — about a 10-minute walk north.

At first, I thought I had missed a quick cut; then, I saw another wide pan shot showing the two side by side. Was this just a “green screen” Hollywood cut and paste? 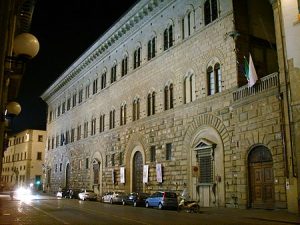 I had already noticed that the building being used as a “stand-in” for the Palazzo Medici in several scenes appeared to be the Palazzo Rucellai, designed by Leon Battista Alberti and Bernardo Rossellino. At face value, the two palazzos have a similar scale and character that is emblematic of the period and typology. 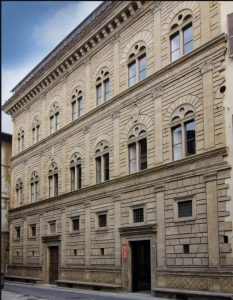 The Palazzo Rucellai was built in 1451 and is a townhouse on the Via della Vigna Nuova. It’s believed to be one of the first buildings to express elements of Renaissance architecture through the use of pilasters and entablatures.

Then, there was a scene that is supposed to be in front of the Palazzo Medici. As the camera panned to the left and zoomed out, it revealed a beautiful Renaissance church fronting on piazza. What? Neither the Palazzo Medici nor the Palazzo Rucellai have this kind of relationship to the street and a church. Yet, the building looked eerily similar to the Rucellai. I then remembered there is another famous Renaissance Palazzo in Tuscany that was also designed by Rossellino. 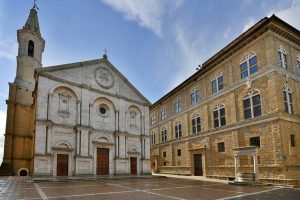 Just a few years after the Palazzo Rucellai, Rossellino designed and constructed the Palazzo Piccolomini in Pienza, Italy. The Palazzo Piccolomini is located on a piazza next to a Renaissance-era church. This had to be it. Suddenly, it all made sense. Pienza is the next hill town down the road from Montepulciano. And, Montepulciano just happens to have buildings which could be “stand-ins” for the midlevel Palazzo Vecchio and the unfinished façade of San Lorenzo. 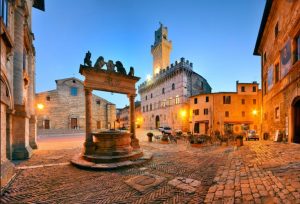 So, there you have it. The architectural mystery is solved. Almost all of the scenes, interior and exterior, were filmed in Pienza, Montepulciano, and other towns in Tuscany. Evidently, the production team decided it would be easier to film within these authentic, well-preserved Tuscan towns than in the center of modern-day Florence.

I did a little fact-checking and as it turns out, Medici’s location manager Daniele Di Biasi explains that “…in Tuscany, [production] can find a lot of cities that still have the Renaissance architecture almost perfectly conserved and easily recognizable. Florence is an amazing and beautiful city, however it is very difficult to adapt the modern Florence as the ancient Florence, I know, that might seems paradoxical, but it is the reality. So we filmed in Florence only what we needed for the series and the rest was recreated in the other towns”.

I discovered that the Medici production team has filmed in over 300 Tuscan locations. Not a bad decision considering the breadth of visual beauty and Renaissance architecture found in the region. Oh, and the fact that the Vino Nobile di Montepulciano, one of the finest wines in the world, is produced footsteps away from these locations. 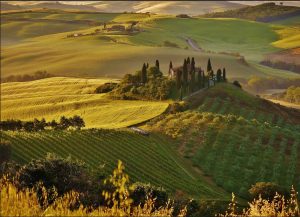 If we can’t actually travel this summer, perhaps we can just let our imaginations drift away for a couple of hours from time to time. Whether it’s experiencing the magnificent Renaissance architecture of Medici or exploring the architectural charms near your home, I hope you’re having a healthy and safe summer!