2016 in Review: Bernardon Continues to DREAM, DESIGN, and SUCCEED 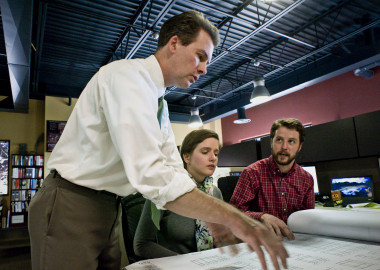 With 2016 having come to a close, Bernardon is celebrating another year of tremendous achievements. In addition to opening a third office in Philadelphia, the firm has exceeded expectations in growing our client base, increasing our local presence, and cementing our place as one of the top design firms in the region.

The firm’s leadership team has also grown, with the addition of Michael S. McCloskey as the firm’s newest Principal. As Principal, Mike will continue to lead the firm’s Philadelphia office and serve as a vital leader of our design team in the areas of multifamily, mixed use, and urban design.

With all of our achievements, the distinguished design team at Bernardon remains hard at work creating the best design solutions for clients all over the region. Significant projects completed this year include the new multifamily apartment product Chestnut Square in West Chester; Rehab at Shannondell, the newest addition to Shannondell at Valley Forge; interior renovations and additions for one of our longest-standing clients, All-Fill, Inc., a leading designer and manufacturer of filling machines and packaging equipment; and a two-story, 73,000 SF office and warehouse facility for BELFOR, the world’s largest disaster recovery and property restoration company.

Several other projects have recently begun design or construction, including Clio Health Lancaster – a high-tech healthcare campus developed by Aspire Ventures which will be complete by Fall 2017. Additionally, early 2017 will see the openings of Centre Square Commons, a retail development in Blue Bell, Pa., and a 13,000 SF distillery, tasting room, and restaurant for Philadelphia Distilling. Other projects currently in design include the UGI Utilities Corporate Headquarters in Lancaster, Pa., Interior Renovations to Wedgewood Pharmacy in Swedesboro, NJ, and the 10-story STAR Campus Tower on the University of Delaware campus in Newark, De.

More of the firm’s current projects can be viewed on the Bernardon project pages.

The Bernardon team and our projects have continued to be recognized for excellence in 2016. One project, Saint-Gobain & CertainTeed North American Headquarters, has received several important recognitions and accolades, including receiving LEED Platinum certification by the United States Green Building Council (USGBC) and the ULI Philadelphia “Organizational Groundbreaker” award for sustainability. A feature about the project was also published in the May-June issue of Retrofit Magazine.

The Bernardon team has also continued to distinguish itself as thought leaders in the industry. Members of the Bernardon team presented at several national conferences this year, including the Society for College and University Planning (SCUP) Mid-Atlantic Regional Conference in Newark, Delaware, the American Society of Landscape Architects (ASLA) Annual Meeting and EXPO in New Orleans, and the LeadingAge Annual Meeting and EXPO in Indianapolis.

“2016 has been a monumental year for the Bernardon team,” said William E. Holloway, Vice President of the firm.  “As we enter the third year of our current plan for growth and improvement, we are pleased to acknowledge the achievement of many of the goals we placed before ourselves.”

“Most importantly, we are grateful for our many loyal employees, clients, partners, and colleagues who have made our achievements possible.  We look forward to growing all of these relationships in 2017 and beyond.”