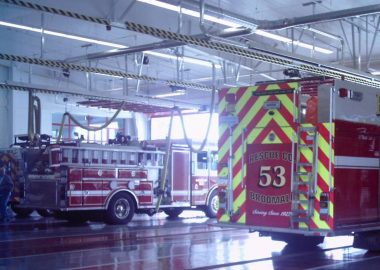 Over the past 30 years responsibilities in fire companies across America have expanded at a record pace with — new and varied types of emergencies, requiring new and more sophisticated manpower training requirements, larger and better-equipped emergency vehicles and larger fire stations to house the upgraded equipment.

This Saturday, Nov. 2, Broomall Fire Co. members have invited present and former members, township officials, state dignitaries, mutual emergency services agencies and the public to a dedication ceremony for their new firehouse located literally a stone throw away from their previous firehouse at the Northeast corner of West Chester Pike and North Malin Road. The ceremony will begin at Noon sharp/

The new fire station is Broomall’s third in the Company’s 96-year history and, just so happens, the dedication for its previous building was held on the same date in 1957.

During the two-years of construction on the $7 million facility some residents were curious as to “why so big and “costly.”

“The public doesn’t realize the type of firehouse we came out of and the parameters placed upon us by various codes and standards that required us to build this type of fire station,” said James Capuzzi, president of Broomall FC.

Capuzzi explains the notion of a new fire station dates back 20 years.

“There were a lot of ideas kicked around, but what we thought best was to build from scratch a brand new fire station. There was a lot of thought that went into this one and we are proud of this building,” said Capuzzi.

The three-hour event will include speeches by fire company members, township officials and state dignitaries. Plaques will be given out to those who assisted in making the new building come to fruition. After the ceremony, attendees will be given tours of the new one-floor, five-bay, 22,000-square-foot facility.

“There’s much room now for the fire apparatus and the firefighting gear rack. The gear rack is in a room off to the side of the engine room. In our previous building, the gear racks were 3 feet away from the trucks,” explained Capuzzi.

Also on the tour, residents will be able to check out the the multi-purpose room, day room, bunk rooms and individual offices for the fire and administrative officials.

“These offices are a great big help for us,” Capuzzi said. “In our previous building we did not have any offices. There was a house next to the building which was used for fire and administrative purposes,” he explained.